Becky has been BEGGING us to let them act out the Baby Jesus story, so since the kids have been wonderful today, we acted out the story of Baby Jesus for worship. Becky was our beautiful angel Gabriel (a girl angel in case you were wondering – although I think Gabriel is really supposed to be a boy),  Nikki played the part of Mary, Tommy was Joseph, and Tom & I filled in the other parts as needed.

Gabriel told Mary she was going to have a baby. Of course, this puzzled Mary since she wasn’t married to Joseph yet. Gabriel told her that God would send his son to her through the Holy Spirit. Mary was so overwhelmed with joy that she knelt down before the angel and worshiped God. 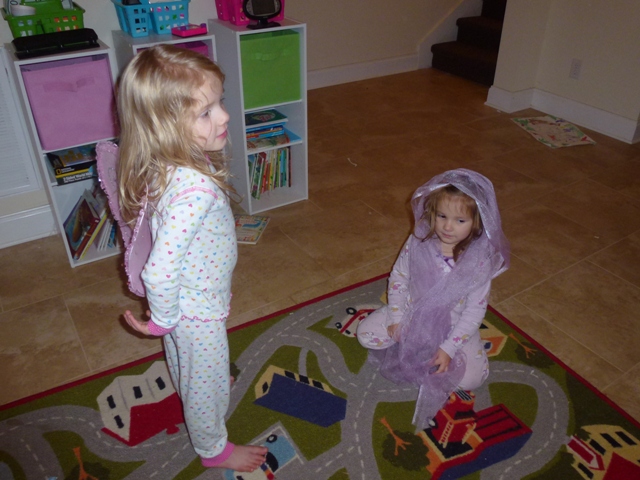 When Joseph found out that Mary was going to have a baby, he didn’t know what to do! Gabriel quickly comforted him through a dream and told him that it was ok to get married to Mary, because she was carrying God's son. He was to be named Jesus. 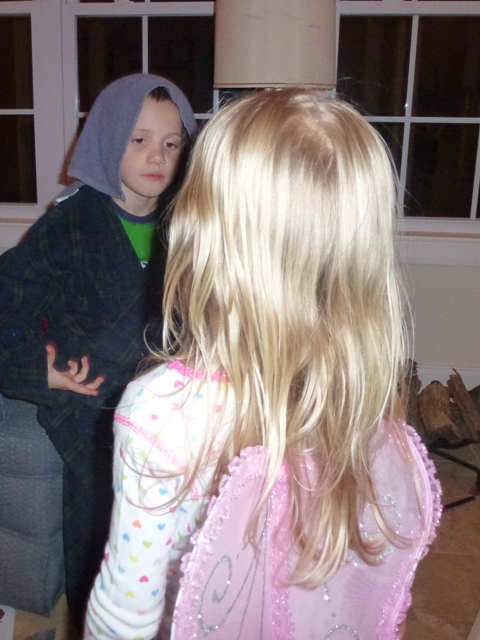 So Mary and Joseph got married. The emperor, Caesar Augustus, ordered that everyone needed to return to their hometown to be listed for tax records. 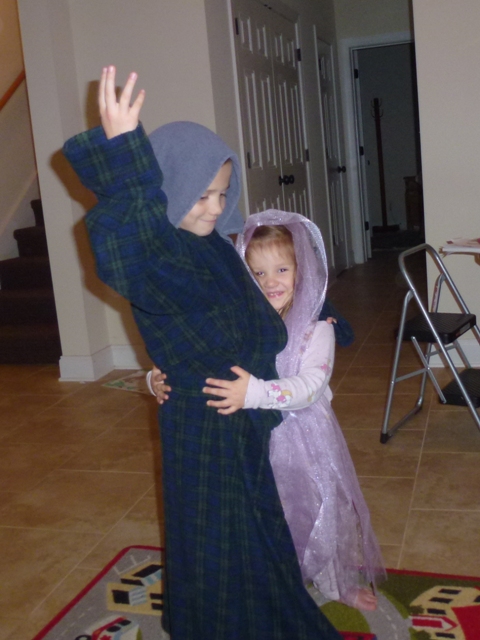 Joseph took his wife Mary to the town of Bethlehem, where he had been born. It was a long journey for both of them, with Mary riding a donkey most of the way. 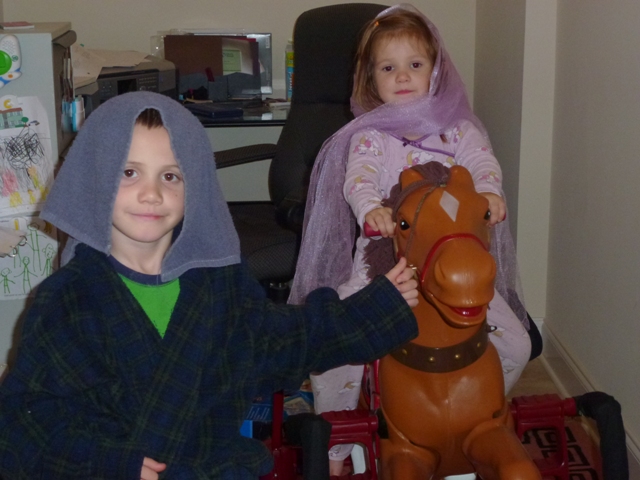 When Mary and Joseph arrived, Mary knew the baby Jesus would be coming soon. Joseph knocked on many doors before finally finding a place in a stable where Mary could have her baby. 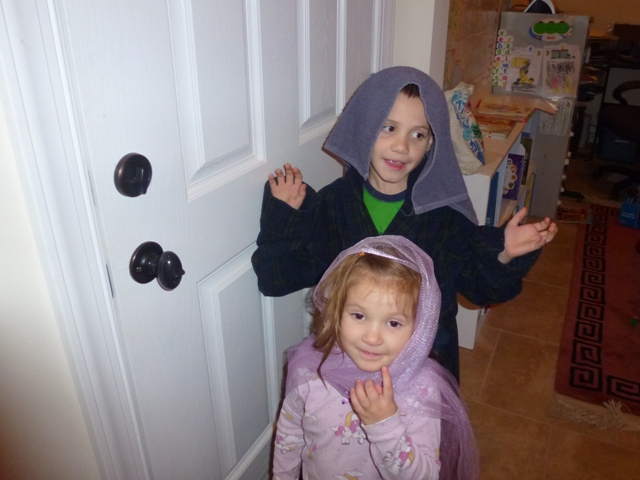 How excited Mary and Joseph were when Baby Jesus was born. 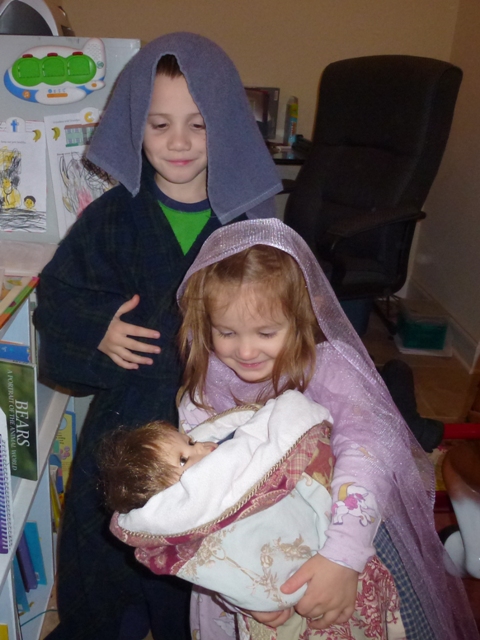 The shepherds were watching their sheep. Don't mess with the shepherds - they get really maaaa-d when something happens to their sheep. They do however scare easily when thousands of Angels appear in the night sky. 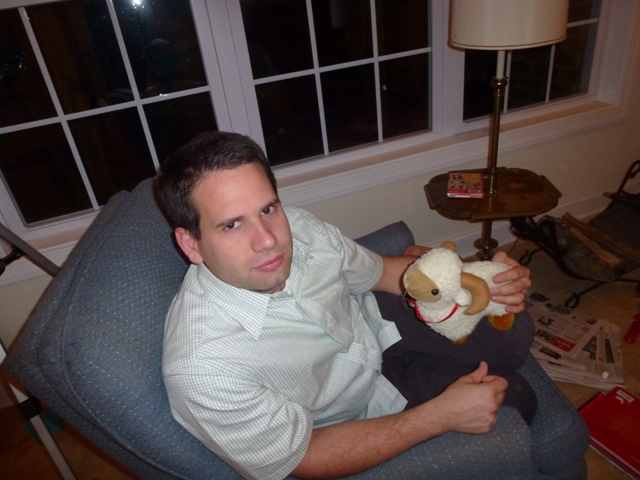 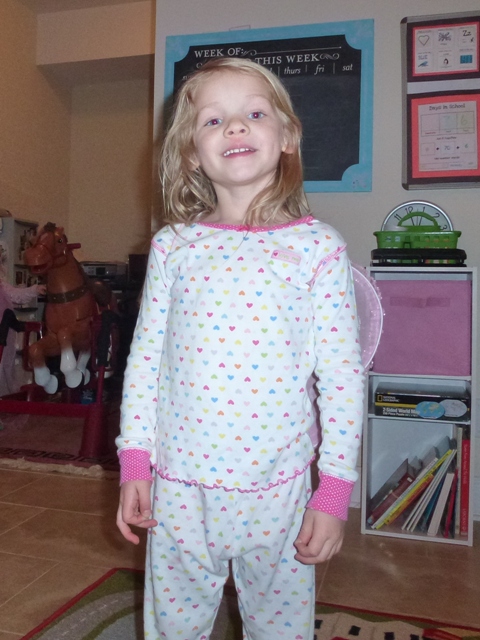 Some wisemen also saw the bright star in the sky and knew that someone special had been born. They visited King Herod, the evil king, to see if he knew where this new baby was. King Herod checked his history books and told them that they should find the baby in Bethlehem, and if they did, to let him know so he could also go and worship the baby. However, King Herod really wanted to kill the baby - he didn't want someone else to be king!

The wisemen finally found Mary, Joseph and Baby Jesus. They offered Mary and Joseph gifts of gold, frankincense and myrrh for the special baby. Then they bowed before the baby Jesus and worshiped him. 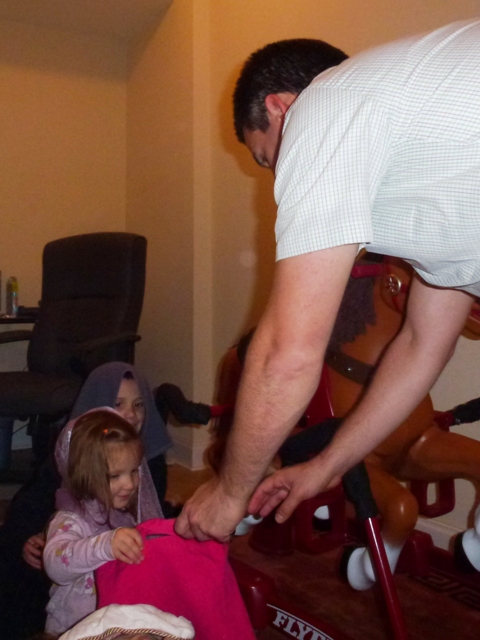 When the wise men were ready to leave, Gabriel told them in a dream that they should not return to King Herod, but should go home another way. So that's what they did. 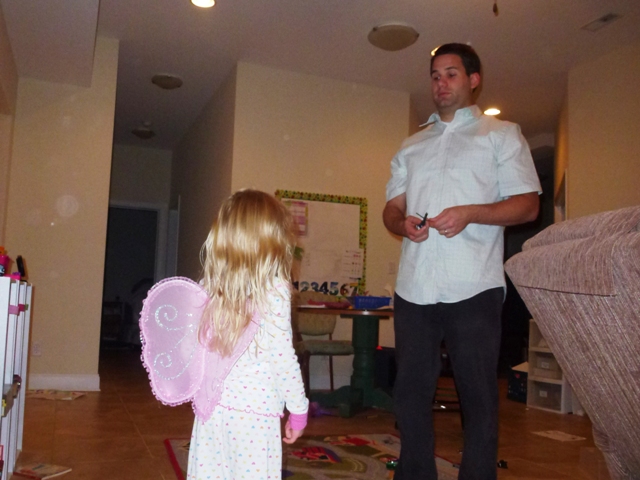 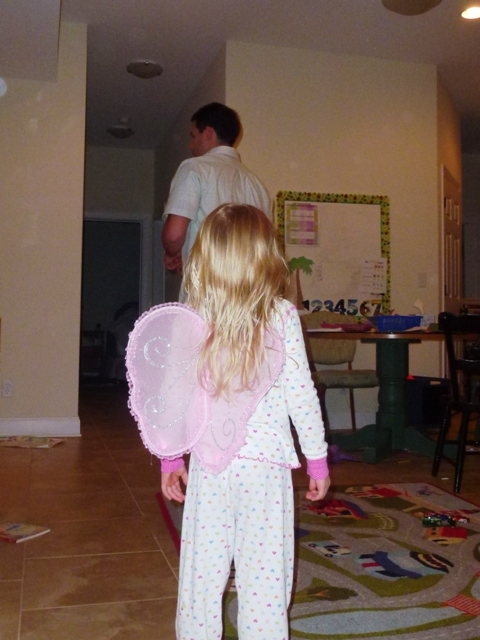 God knew that this would upset King Herod, so he sent an angel in a dream to Joseph to warn him to leave before King Herod could do something to harm Baby Jesus. 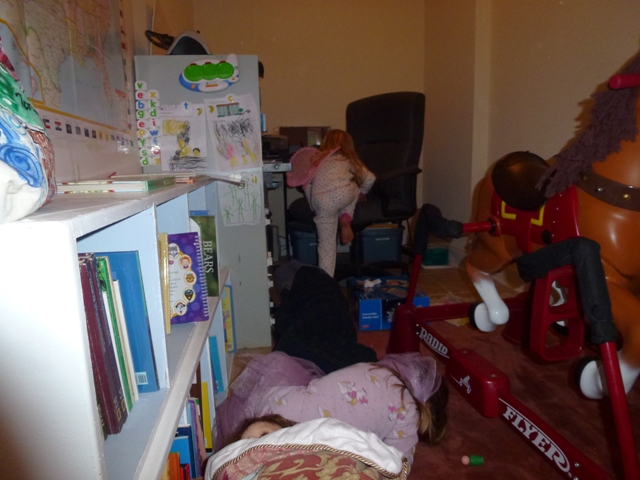 The angel told Joseph he must wake Mary and take the baby Jesus to Egypt, where he would remain until the angel told them it was safe to return home. 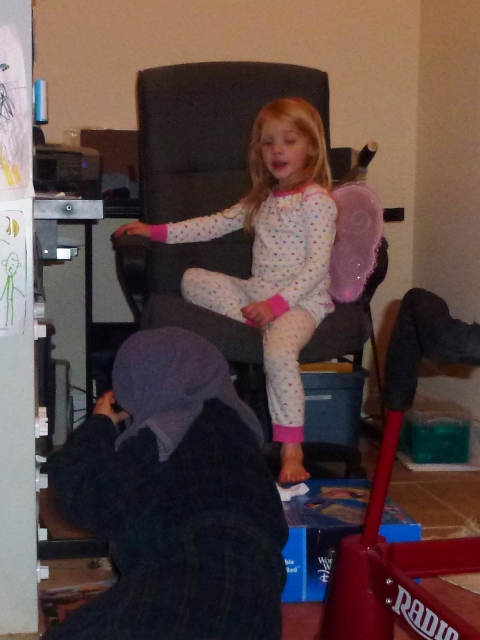 Joseph must have been tired, but he obeyed God's message to him, and quickly woke Mary up so they could escape to Egypt. 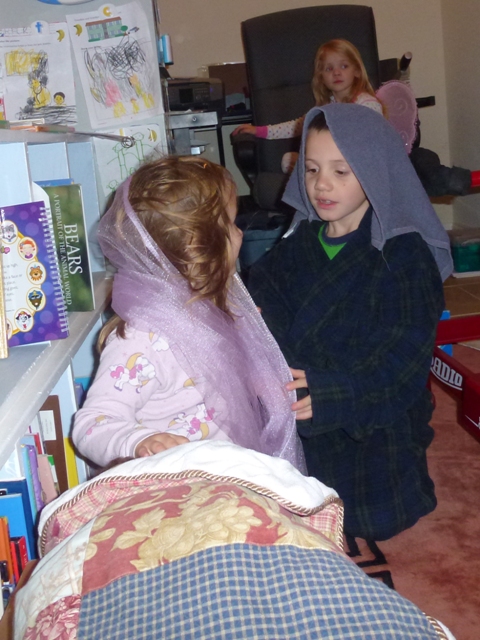 When King Herod found out the wise men had returned home a different way, he was so angry that he ordered all the baby boys under the age of two to be killed. He hoped this would destroy the future king, but God protected Mary, Joseph and the special baby Jesus. 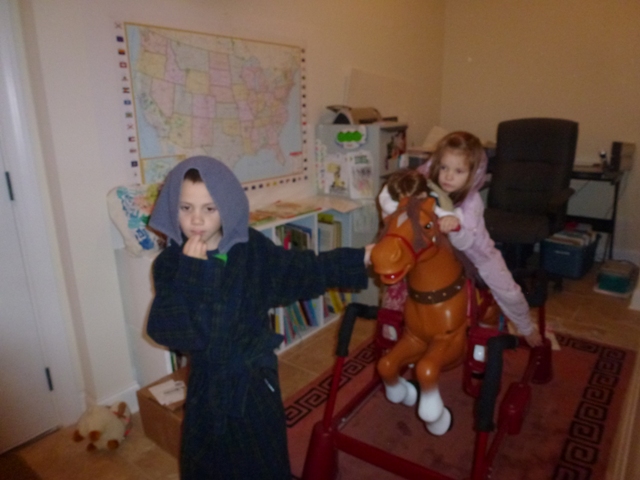 When it was finally safe to return  home, the angel again appeared to Joseph in a dream and told him that King Herod had died and it was now safe to return home. So Mary, Joseph, and Baby Jesus returned to Nazareth, where Jesus would grow up.

The kids LOVED acting out the story - so I'm sure we might have to do it again, and again, and again! Thankfully, its a story that never gets old.  We sang songs, then had prayer and then it was time for bed. 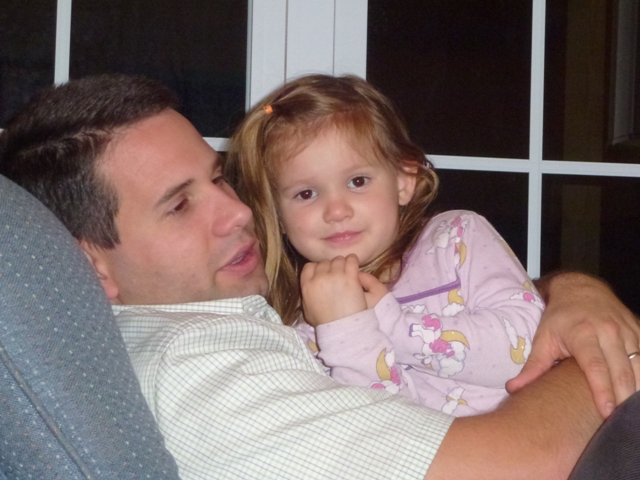 I think Nikki would have been happy to sleep in Daddy's arms if she could! 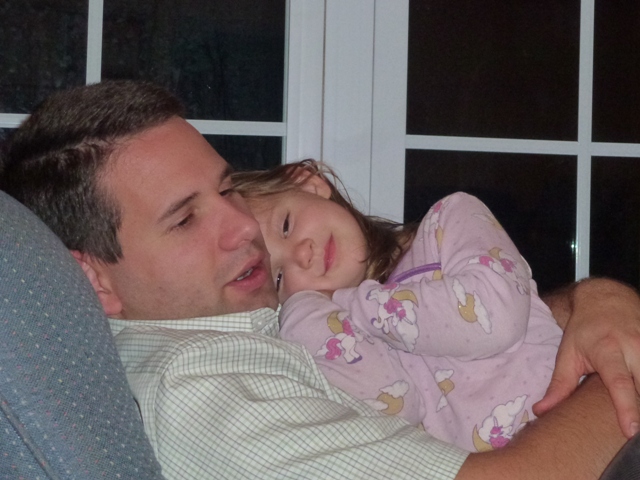