Naughty or Nice - 25 Days til Xmas

Since Tom & I worked all day yesterday, we didn't get the opportunity to see what happened on our house last night. So we snuck out to the house first thing this morning to take a peek. They have framed up most of the walls on the first floor.

We talked with Dan a bit about what we want for our house. Mike had done some research and found that it's about 10K cheaper to go with cement siding than brick, so with that much of a price difference, we will save the moolah! We are also going to do some brick, mainly around the foundation walls - so the back will have brick up to the porch, and then the brick will taper off up the sides to the front of the house for the siding. We also discussed where we might want to have stone siding put up as well. It looks like the front of the house and the master closet will be the best places for the stone accents, so that's been decided. 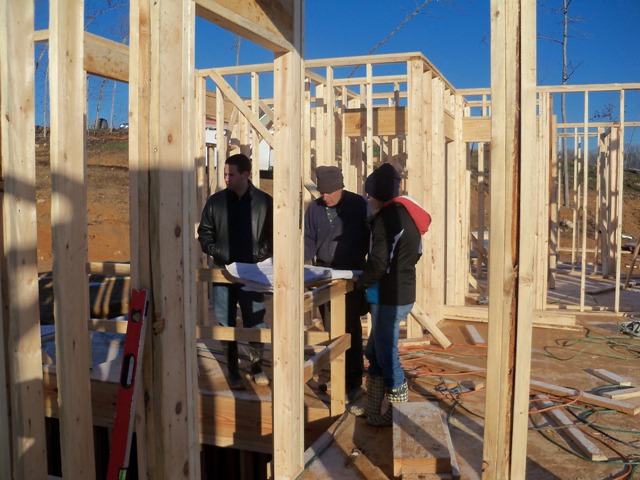 After deciding what the walls were going to be covered with, we talked garage doors. 8ft vs. 9ft. I want 9ft. doors because someday, our kids will learn to drive. SCARY! I would still like to have a house after they learn to drive, so I felt 9 ft. doors would be best. The plan calls for 8 ft. doors though. So we measured the opening and there is approximately 25' 10" of garage bay opening. 3 8 ft. doors will barely fit, so 9 ft. it is. However, there is still 6 feet or so of space in the garage to figure out. We thought that we'd want a smaller garage door for bikes and larger equipment, but those doors are harder/more expensive to come by, so that idea was out. We decided on a 3ft exterior door close to the house, so we can make it easier to put bikes away without them encroaching on the car space. 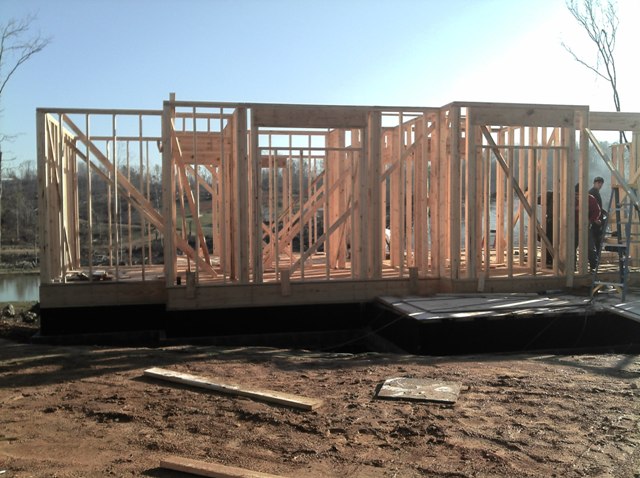 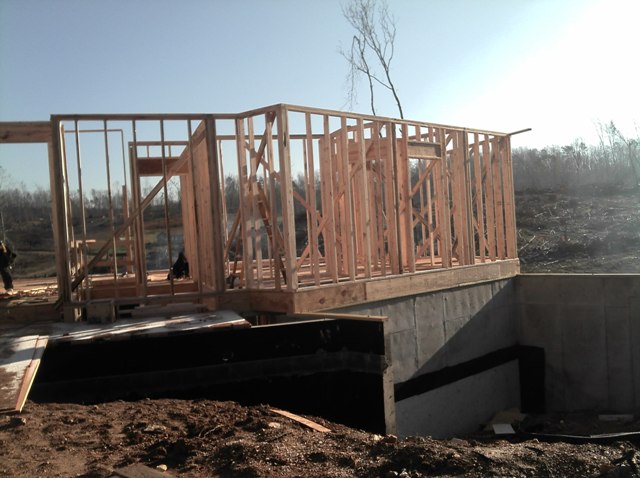 Then we discussed walls on the second story. We have to have access to the attic from each bedroom - so we will probably be extending the walls into the attic as much as possible and just adding a small door for access. We also talked about possibly opening up the space beside the office so the office area will be larger - but the HVAC goes there so we'll have to see if it will work. Whew! So many decisions!

Here's the opening for our great room window. 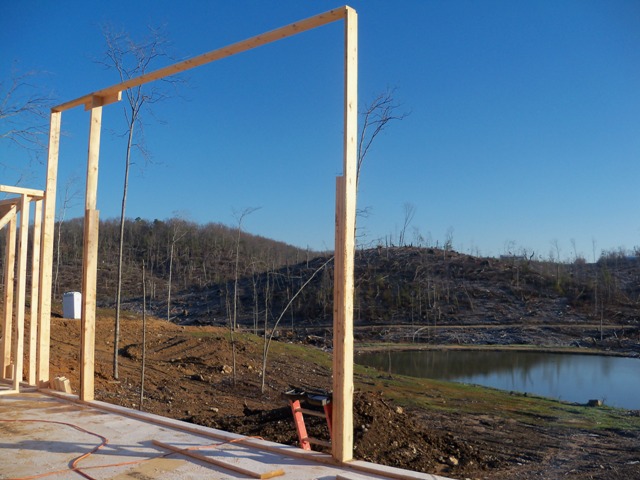 Panoramic view of the pond 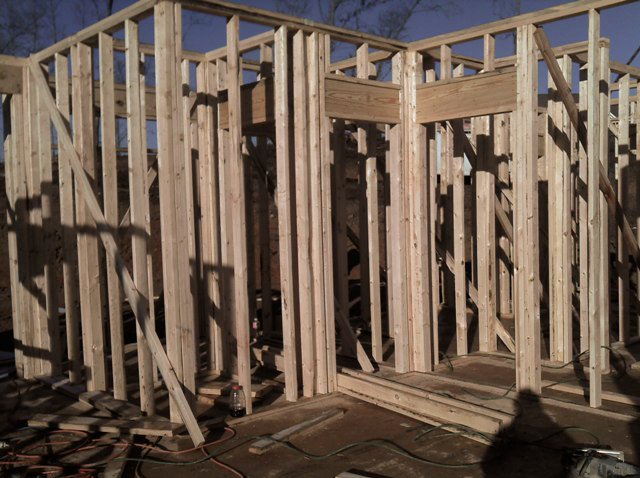 The pantry, kitchen and laundry walls have been setup now. 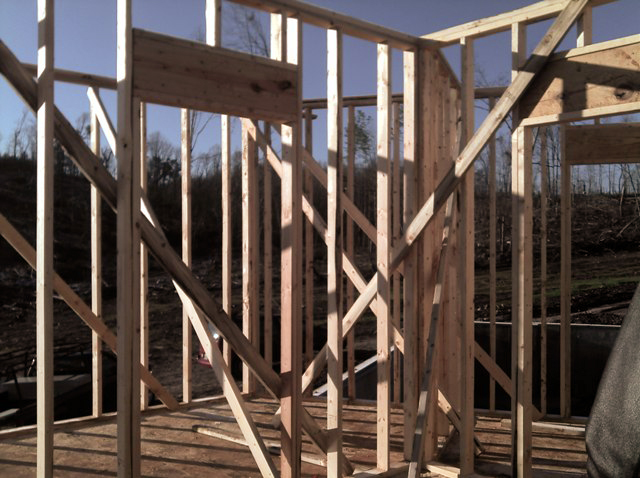 Tommy hiding out under the stairs. 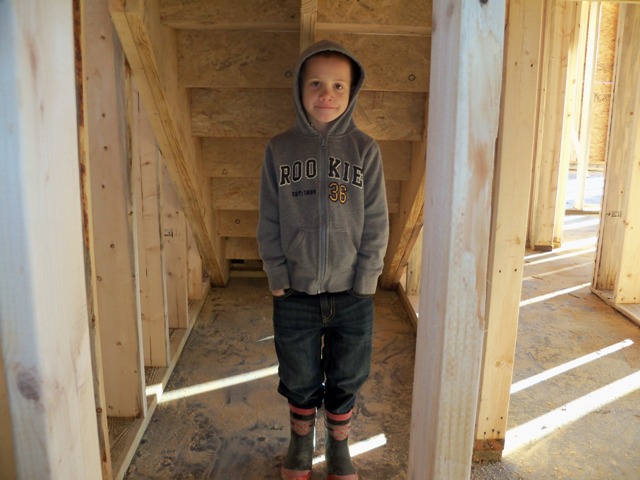 Our future family room has a nice view of the pond. 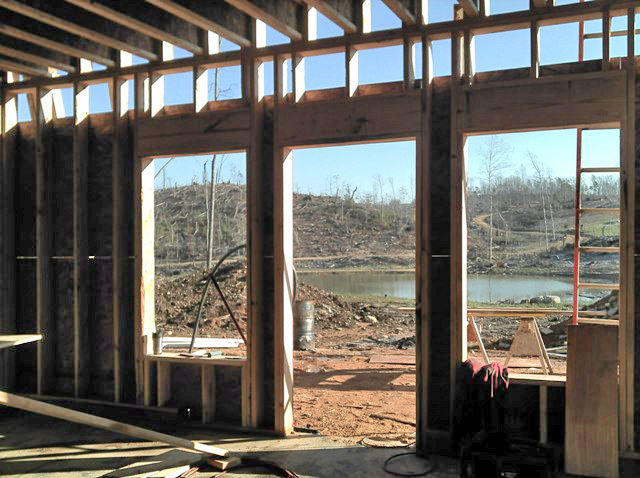 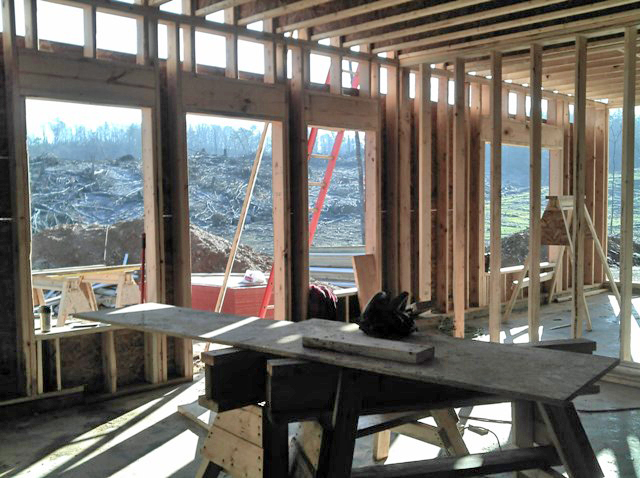 This will be a nice spacious bedroom someday. 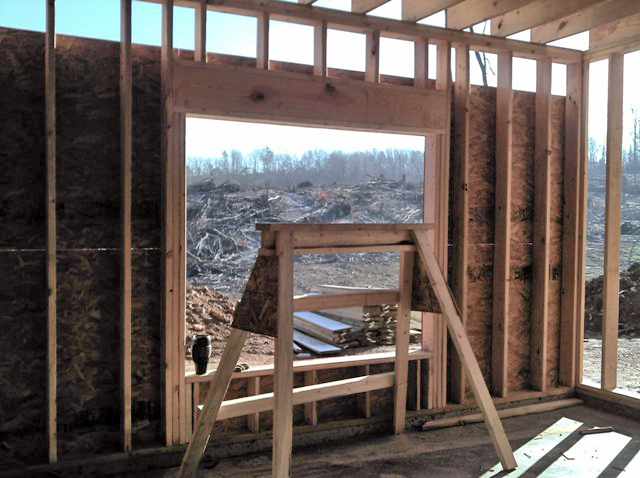 We also have a new window made up for the "spare" bedroom. Maybe it will be another office. Who knows! 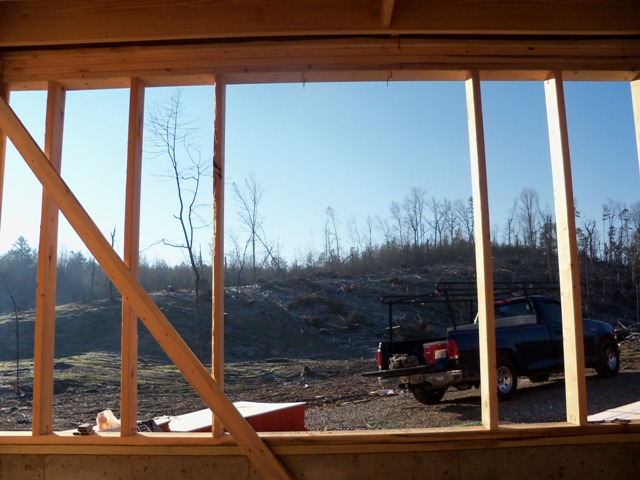 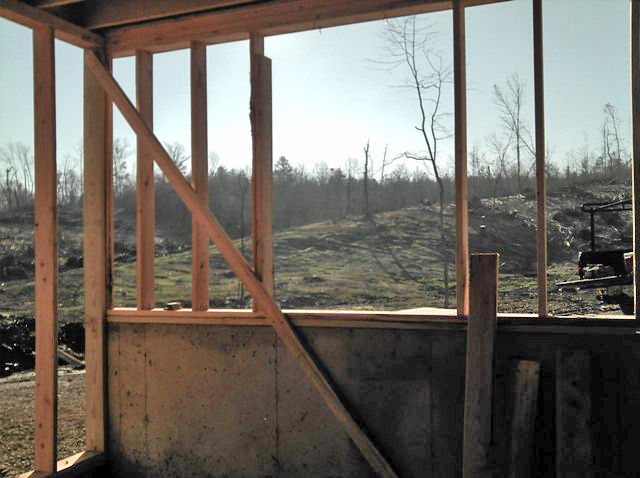 Storm shelter that I hope we only have to use for storage! :) 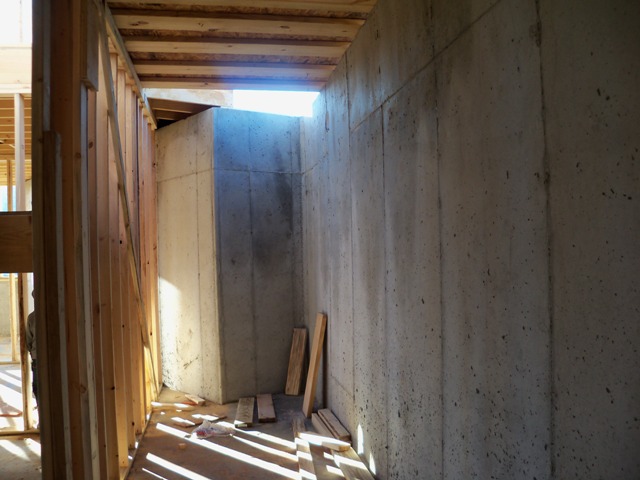 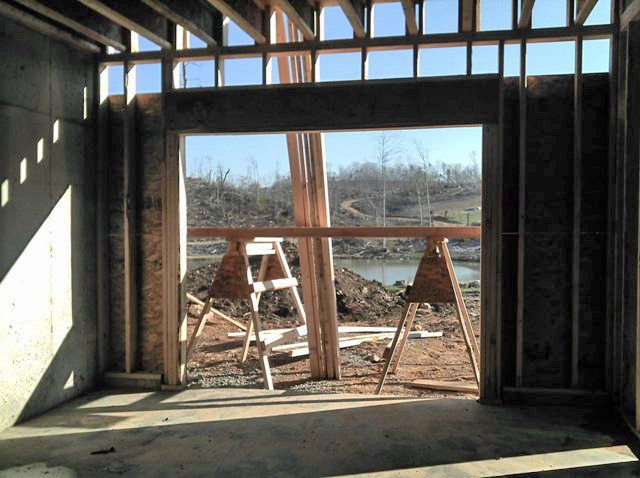 View of the back of the house. 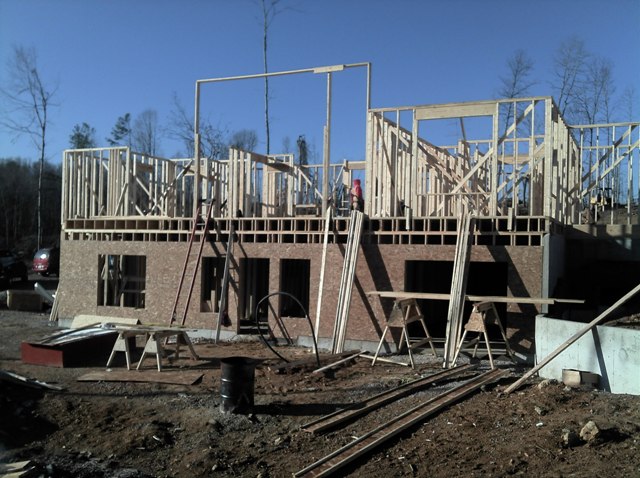 The future screened porch will be coming off this side of the house. 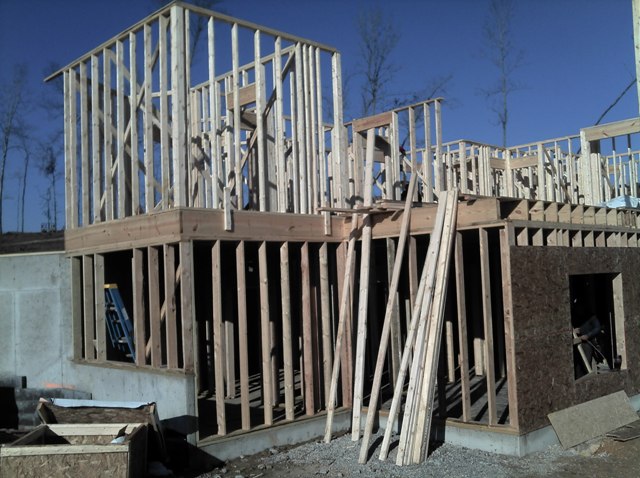 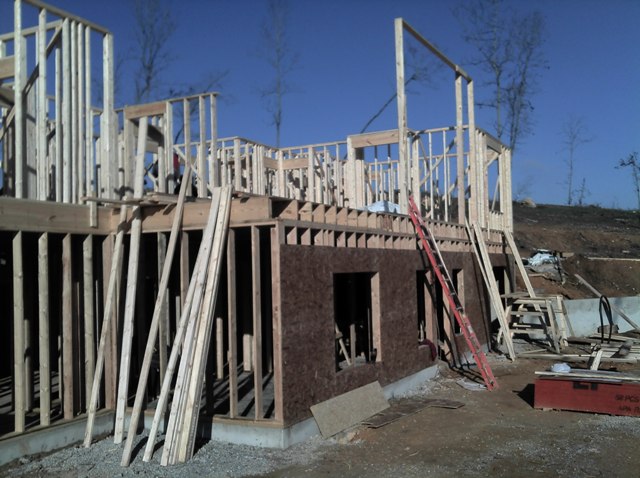 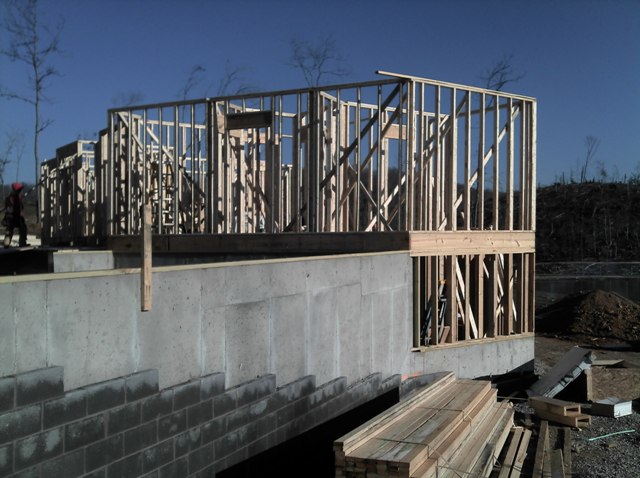 When we made it back to the house, Tom had to rush off to work. I leisurely ate my breakfast, chatted with my mom about what we were going to do and when, and then sat down at the computer to check my email.

The kids were happily playing in the girls room. I told Tommy that it was time for school, so he headed downstairs for school. I'm not sure how much time passed, but all of the sudden I heard Becky say, "Nikki, I just don't know why you would draw on the walls though." Uh-oh, better go investigate, right? Yeah, Nikki had found a pencil and had drawn ALL OVER her wall. 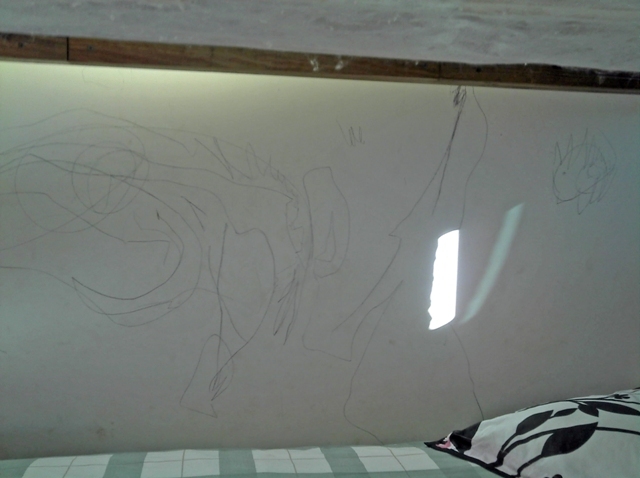 Thankfully it was pencil, and thankfully the internet has some great suggestions on how to get pencil off the wall. A baking soda and water paste does wonders on pencil art on the wall. 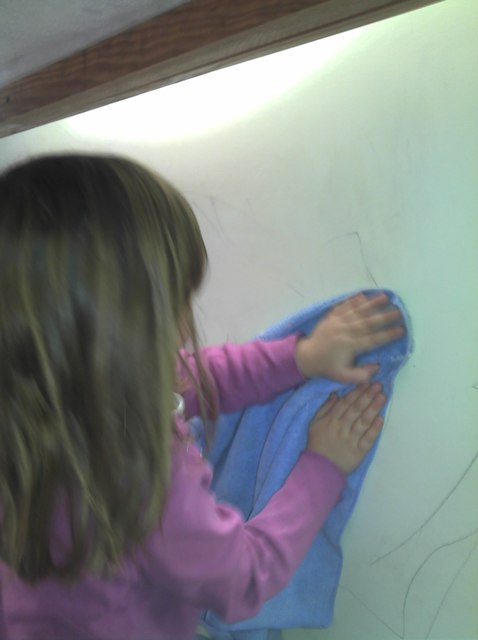 Nikki went to work scrubbing that wall. I showed her how to do it and supervised for a while. She was doing good, so I left to go do some work. I kept checking back, and she was working - even if it was rather slowly. The last time I went to check though, she was a little too careful scrubbing the wall.

She scrubbed off the paint all the way down to the drywall paper. Horrifying! This isn't our house - it's Grandma & Grandpa's NEW house! AHHHH!!!!

I freed her from her punishment and finished cleaning the walls myself. Guess now I'll have to figure out how to patch that section of the wall as well. This little stinker is going to have to work EXTRA hard to stay on Santa's good list. Hopefully, with only 25 more days til Christmas, we can make it...right?

Here's what Dan & Darryl got done while Nikki was creating art. Much as I love Nikki, I like theirs better. :) 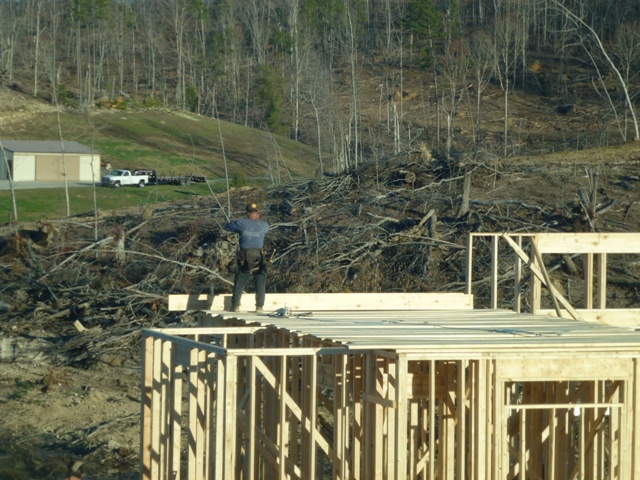 Getting ready for joists for the second floor. 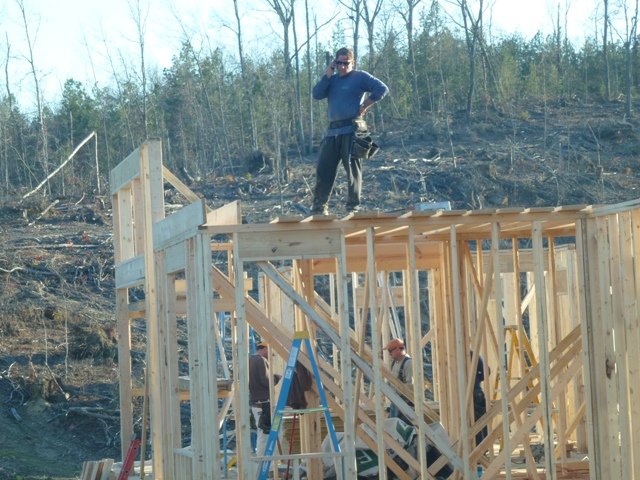 I would say that this is when we should call it a day...but the day wasn't over yet. I met my mom & sister at our old house to let them tour around it to see the "finished" product. Yay! Then we headed to Panera's to meet Tom for supper. After supper, my mom & I headed to the mall to return some clothes. While there, she discovered she had left her wallet at Panera's - we called them to be sure they had it - a brown wallet with black on it that was kind of like animal prints and thankfully they had it. So while she finished returning the clothes, I ran back to Panera to get her wallet. When I got back to the mall and handed it to her, she said, "This isn't my wallet..." Uh oh! It was about 7pm at this time and I needed to drop my mom off at the Chattanooga Airport by 7:20. We ran to the car praying that Panera still had her wallet, and I suggested she check the floor of the truck just in case it had fallen out there. Miraculously it was there under her seat! So we returned the missing wallet back to Panera (I hope whomever is missing it finds it for real!) and I took her to the Airport. Right-on-time!

Whew! I'm glad today is over. Hope tomorrow is easier!