Today was field trip day for Tommy. We went down to the house site so Tommy could lay some of the bricks. Gene told Tommy how to lay them down so they lined up with the string. 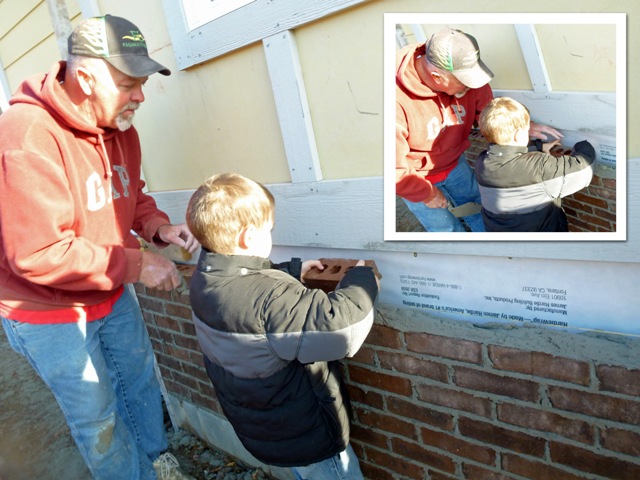 Tommy was soon on a roll and quite confident in his abilities! I think he would have stayed there all day if we didn't have other things to do. 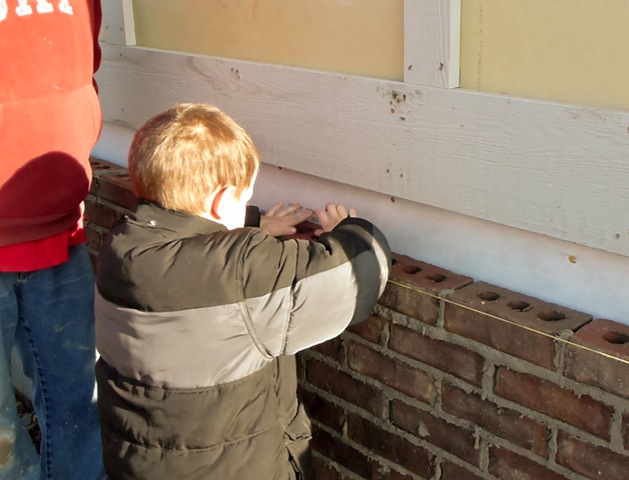 Gene marked on the wall where Tommy laid his brick down, so we will always know where to find Tommy's bricks. :) 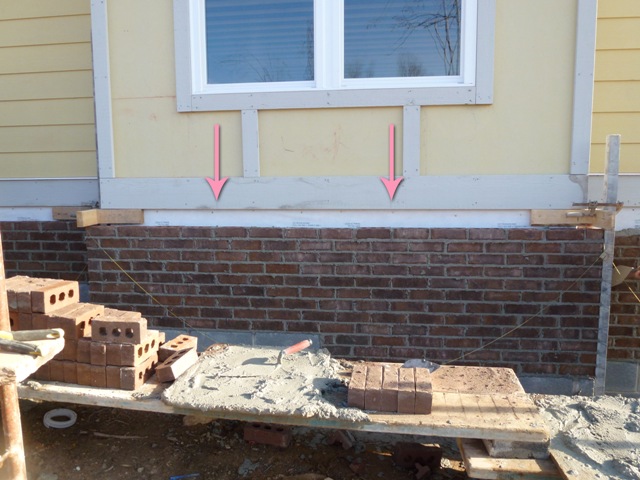 Then we snooped around the rest of the house. Tommy was excited to see the electrical outlets had been trimmed - although that had actually been done yesterday. :) 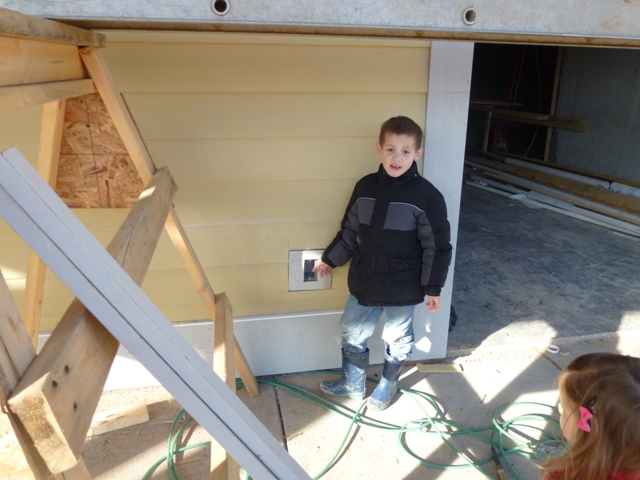 Then Tommy and the girls had fun hiding under the stairs in the basement. 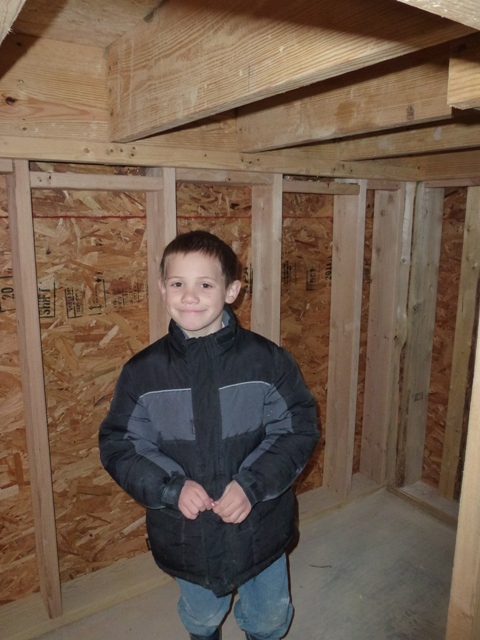 The electrical boxes have arrived, so I'm guessing they will be installed sometime next week. 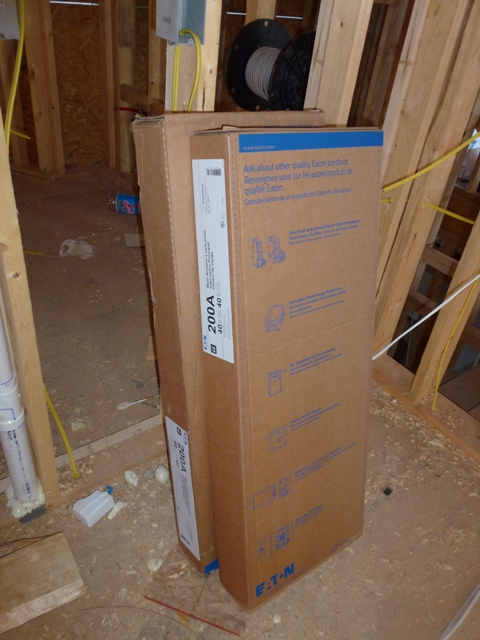 We watched the electrician James crawl around in the attic to install the lights in the Great Room. 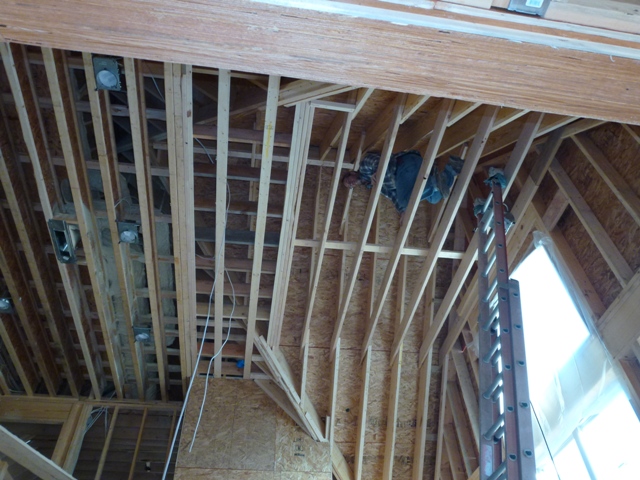 These lights will not be fun to change someday, so I hope they never go out! :) 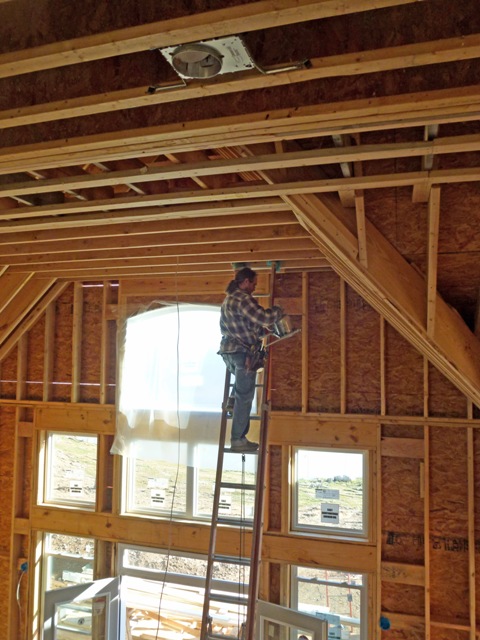 The girls had fun pretending to turn the switches on and off again today. 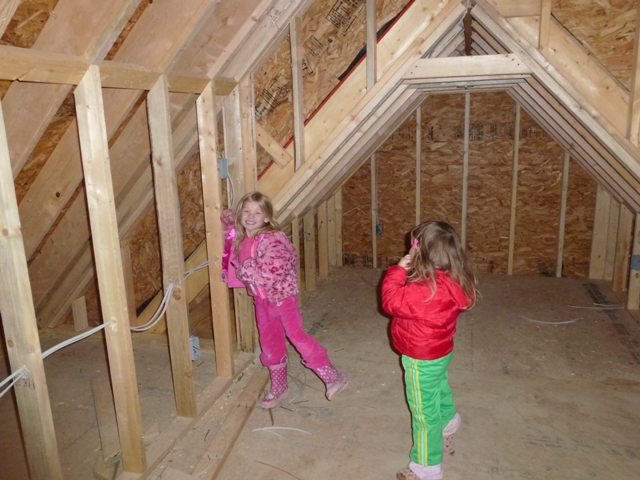 We inspected the master bathroom while Becky sat down to draw some of the things that were happening at the house. 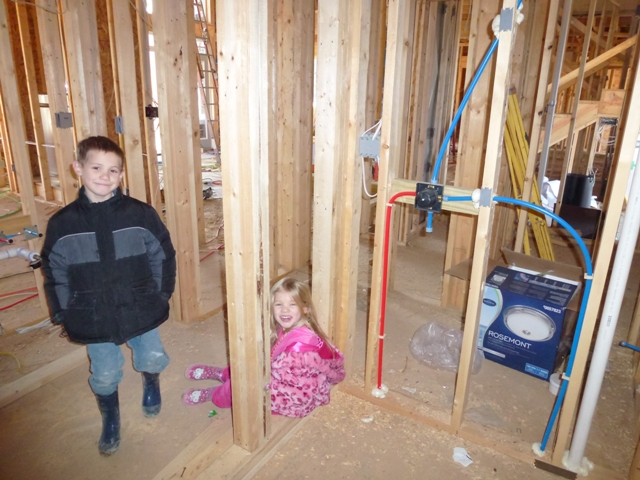 At least, that's what she "claimed" she was drawing. I think she was actually drawing caterpillars and butterflies. :) 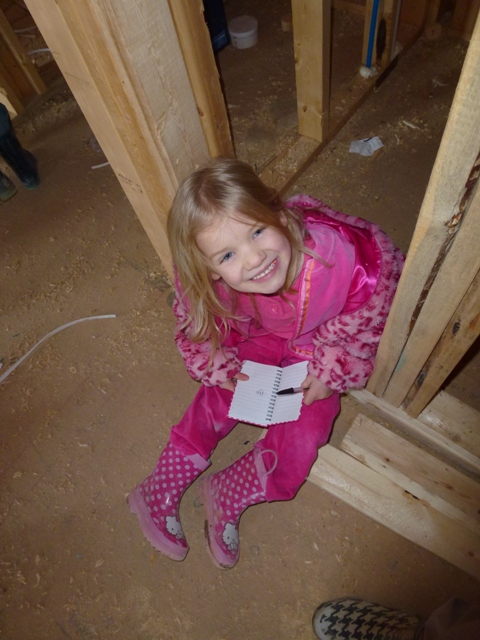 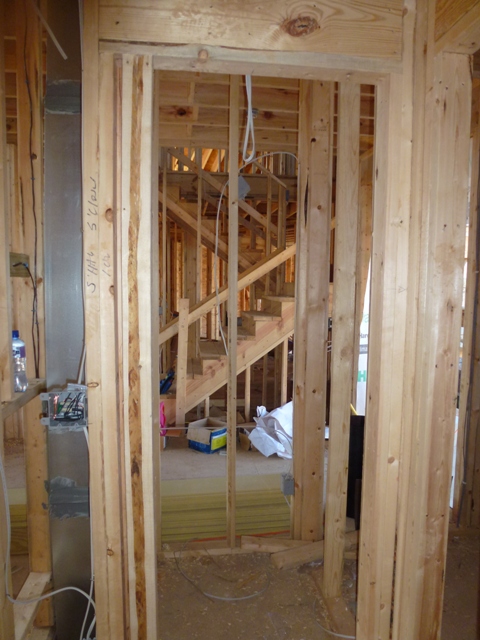 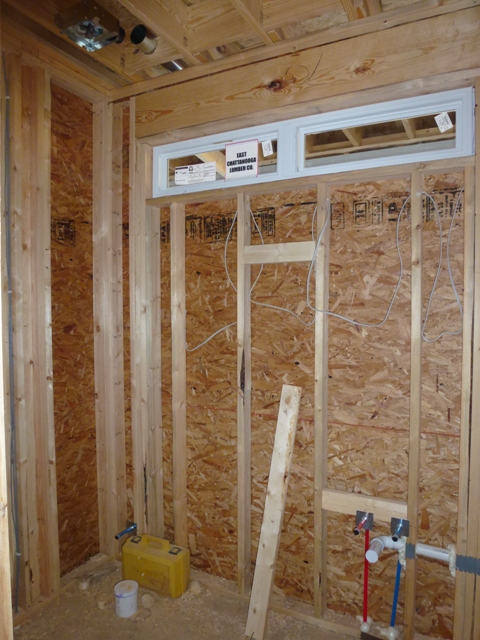 Then we went outside to play in the stream. 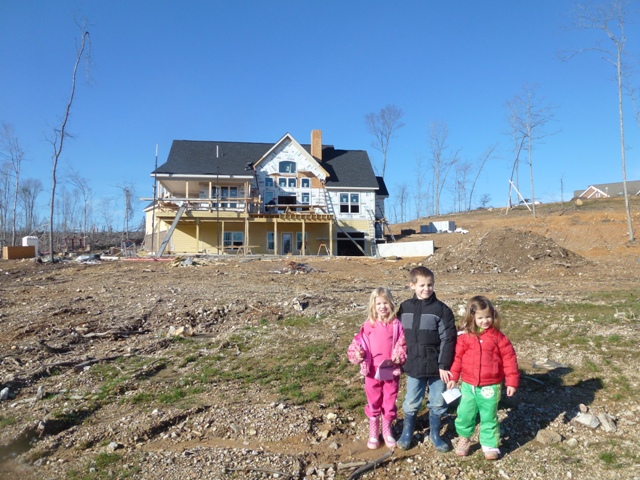 The girls found a log to draw pictures on. 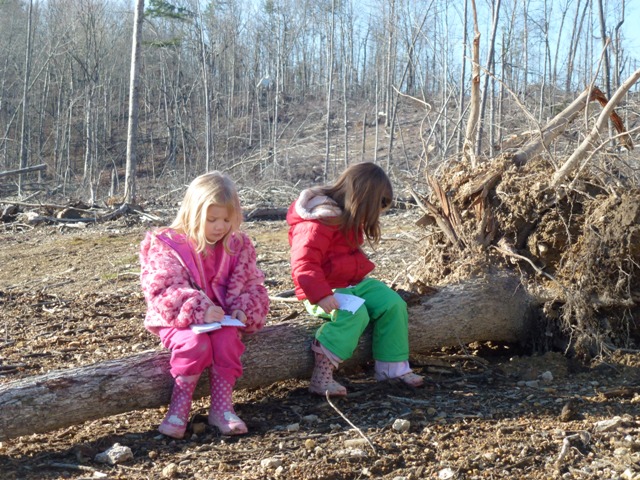 Then we stopped to look at the brick on the house. 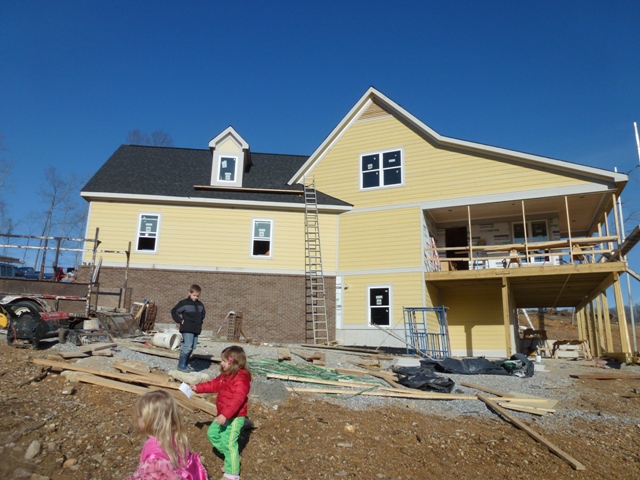 Here's a closeup of our brick. 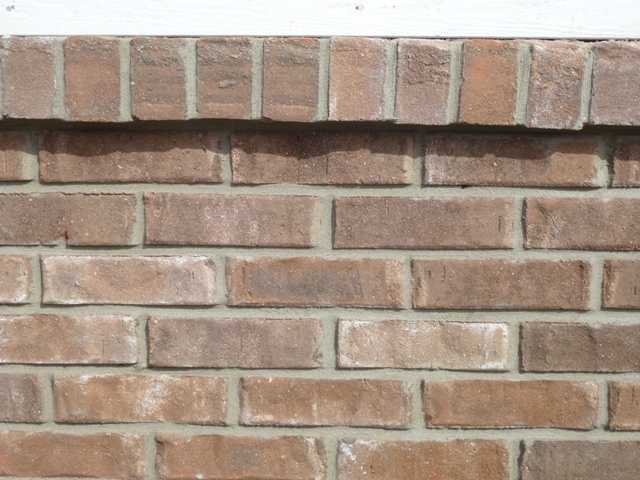 I can't believe how straight, even, and clean these bricks are! They look amazing! 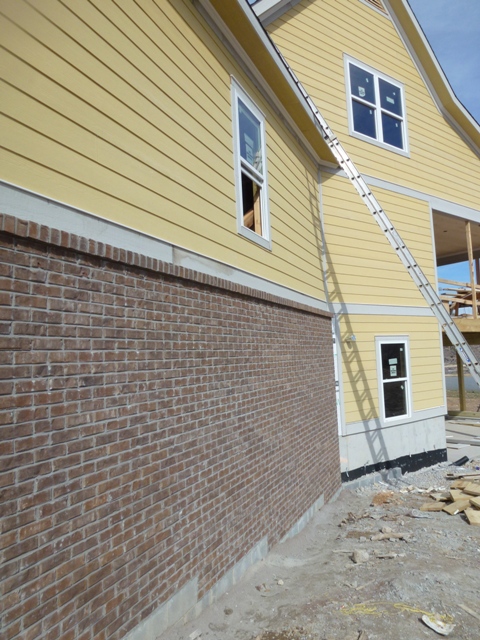 Then we walked to the front of the house where they had started laying brick along the front porch. 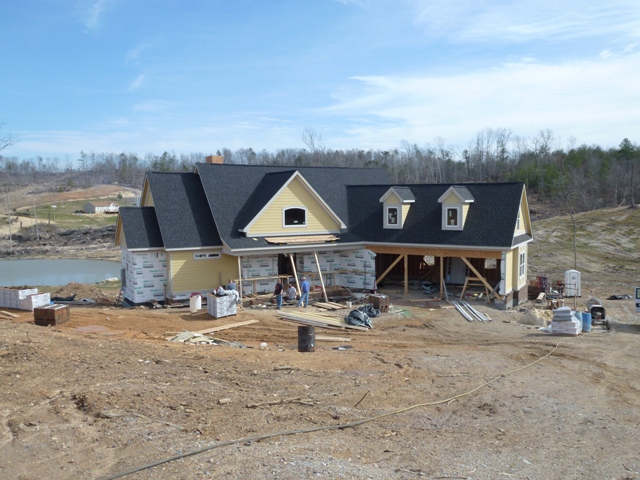 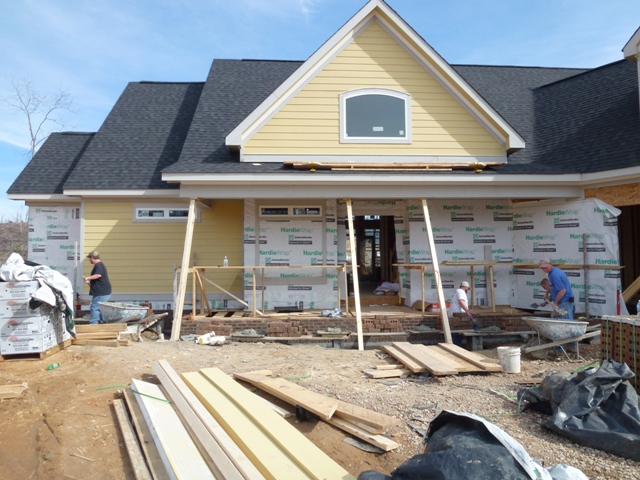 Then it was time to head to Whisper Creek to meet Mike and look at some of the bookcases he has made to make sure they are similar to what we are looking for. Our bookcase/desk will be close to three of those doors. Can't wait to see them built at our house! 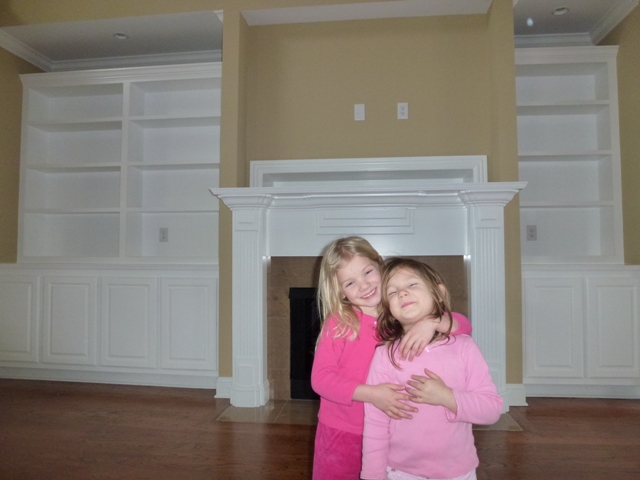 Then I took some pictures of the columns in the house. We will have similar columns in our house. I think they will look awesome! 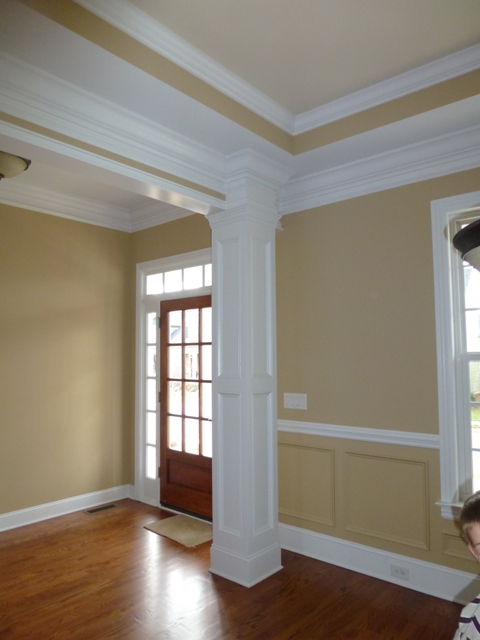 Kiddos cheesing for the camera. 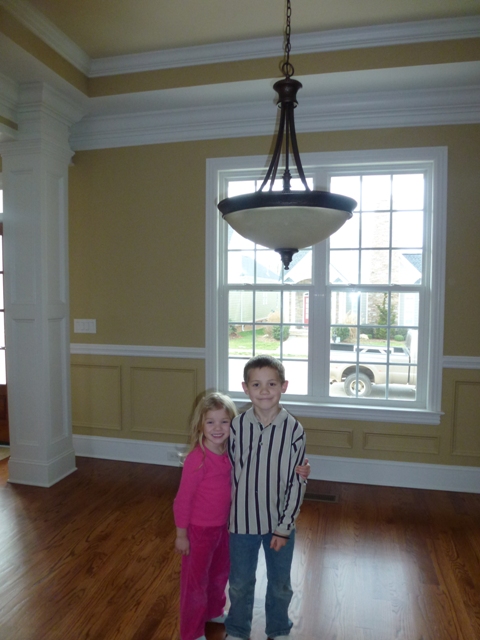 The cabinet makers also showed up because this house needed a couple of changes in the kitchen. So while Mike talked with them, I looked around the rest of the house. Here's the powder room. 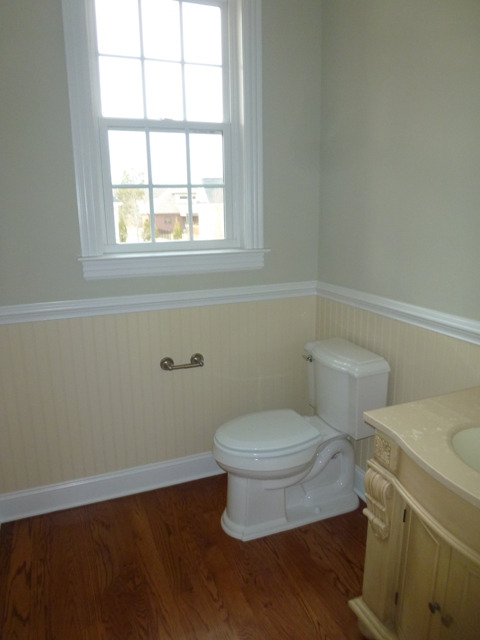 I love the beadboard on the walls. I would love to do something similar in our powder room. It makes the room so elegant feeling. :) 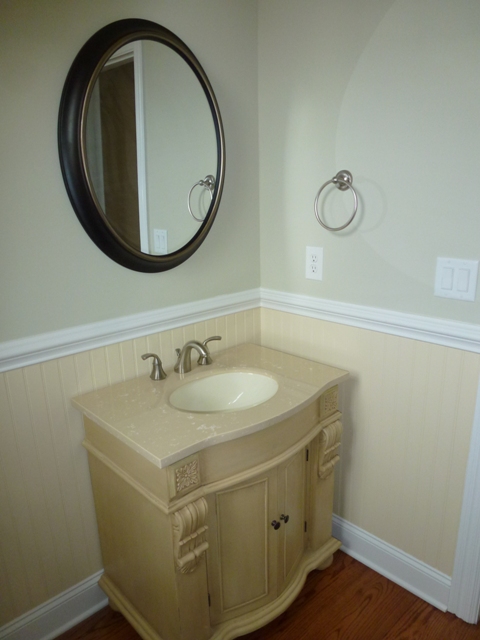 Then I peeked in the laundry room. I LOVE the sink/cabinet. Simple but useful. 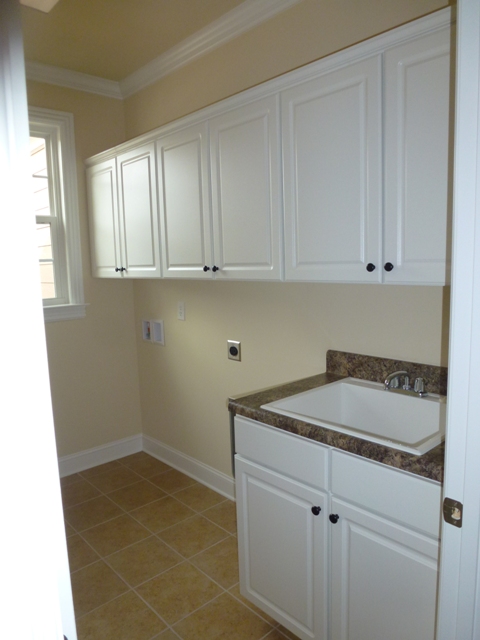 I just barely had time to peek in the master bathroom to look at the cultured marble countertops before it was time to go. 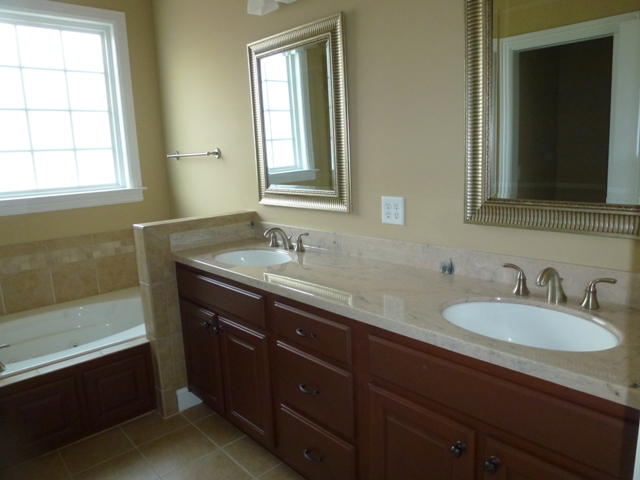 When the cabinet guys said they were including cultured marble counter-tops in their bathroom price, I was thinking of the white cultured marble and wasn't very excited about it. Apparently cultured marble has come a long way, because these really don't look half bad! 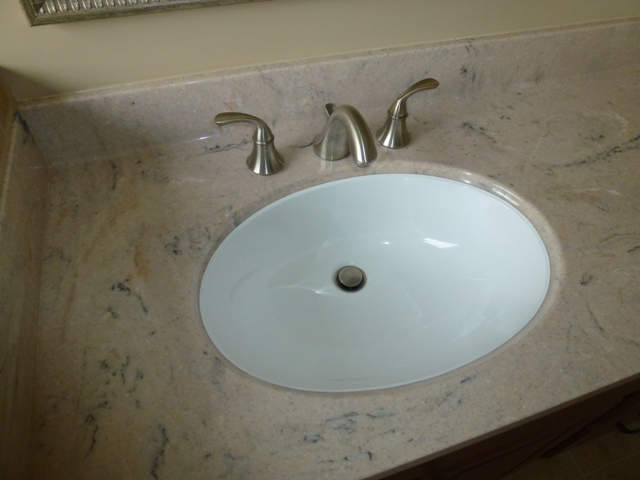 Then the cabinet guys said we could come to their workshop to see a sample of the cabinet door they had made and some of the cultured marble samples. So we took another field trip to their shop, and I got to tell the kids about my days long ago where Tom and I had built some furniture. It was fun walking around the workshop, seeing all the cabinets in various stages of being put together. Unfortunately I forgot I had a camera with me to take pictures, so I don't have any of the workshop.

I did remember my camera when we went to look at the cultured marble samples. They have a couple very pretty samples that I might consider for our bathrooms. 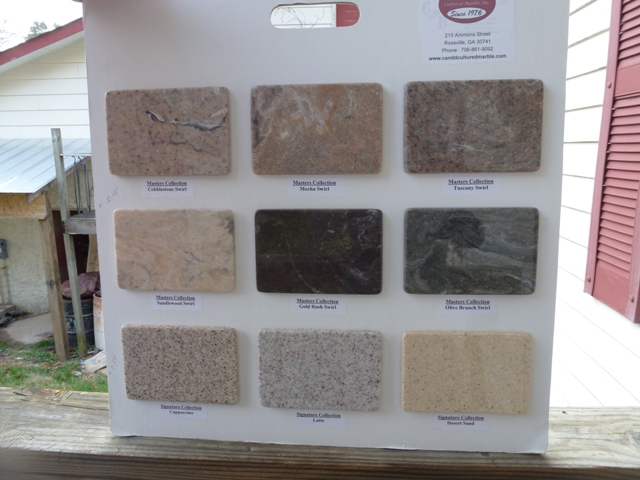 The fancier cultured marble looks great, and while more expensive than the standard white or bisque I've seen in other houses, they aren't as expensive as actual granite. I'm not sure that I love them yet, but I'm happy to sit on them and think about using them instead of granite if that could save us some moolah! 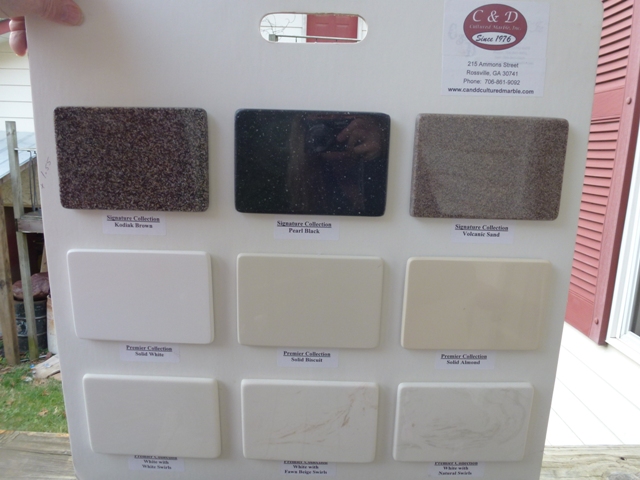 Email ThisBlogThis!Share to TwitterShare to FacebookShare to Pinterest
Labels: Building a House, Homeschool